The 2b2t Anarchy Server Wiki is a community project on 2b2t that is open to the entire public in order to preserve the history of the server "originally" started on November 2nd, 2016. As of June 2020, the wiki has 397 content pages, and over 5,900 other pages, alongside nearly 1,100 file uploads.[1]

The 2B2T Wikia was founded on November 2nd, 2016, during the Rusher War. It was originally founded by DoctorRobotix (Most likely a Rusher due to the wiki's navigator that calls groups' "Clans") who abandoned the wiki very early on in its history. He was the only admin on the wiki and so the wiki was highly susceptible to vandals/griefers (Mainly Jeding and TimMcNukepants) and shitposting when he left. However, some players did add history and relevant pages which was buried under the mess of the shitposts (some were TheSnowArmy, Toz76, StealthBlaster, jared2013, Ppxje, and _Henry_).

On November 17th, 2016, Dark_Annihilator came on the original 2b2t wiki and began to edit. After experiencing the events of the Rusher War, Dark decided to write down most of the things that happened during the War. After this, he became so intrigued by 2b's history that he began to watch several videos, read old reddit posts, and gain knowledge from various other sources that all pertained to 2b2t. He added several necessary pages and deleted content from shitposts (could not delete pages as that is only an admin command). He contributed to the wiki just about everyday.

Eventually, a small population of players began to make small contributions here and there and began to view the wiki. These players included (but not limited to) JPLanley, Niftyrobo, MasicoreLord, Coltsnid, Stlavs, Memerxdddddmemer1337, MemeCynic (HappySeniorMan), kekkekkek1, PepsiLord420, Pupperoni (DemonElite119), and a few others. Griefers and shitposters continued to do their thing but the population kept deleting whatever they made. Nifty came up with the idea to create the 2b2t Anarchy Server wiki in order to have more control over vandalism and shitposting. He eventually founded it on December 21st, 2016. Very badly archived versions can be seen here, and a better one here.

Dark, Nifty, and Masicore began to transfer all the pages from the old wiki to the new one. During this, a few pages were added and Masicore placed several notifications and banners around the old wiki in order for the older editors to see and come to the new one. Overtime, new players began to come to wiki and the more people viewed the wiki, the more people began to edit and bring others which brought a decent amount of players to the wiki everyday. From here, the rest is history and on May 14th, the wiki achieved its 200th page. It has relatively been the same and plenty of people contribute, whether it be small tweaks here and there or pages with full history. Nevertheless, the 2b2t wiki has become a decently sized community project and continues to be a hub for 2b's vast history. On August 8th, Rohen Tahir starts his "How not to write pages" series on the wiki.

During August of 2017, jared2013 asked to help the wiki through a reddit post. Niftyrobo had been ashamed of the wiki and so promoted Jared to bureaucrat (god status) to wreak havoc on the wiki on August 4th. Jared imposed a tyrannical rule over the wiki with him giving strict orders not to make pages that he deemed to be stupid (which was 90% of everything) or get instantly banned. Eventually, the majority of the community of the wiki began to complain about Jared's bias bullshit against anything to do with newfags. A vote was made to demote Nifty and Jared but was soon deleted by Jared. The wiki and reddit where filled by angry users who wanted him gone, and this reached a peak on August 6th. In an autismal outburst and fit of rage, Jared got some of his Spawn Mason buddies and trashed the wiki. However, help was asked from FANDOM Staff and they reverted everything that Jared made and blocked him, his buddies, and Niftyrobo, leaving Dark_Annihilator ownership of the wiki on August 7th. Now there was hate that all the wiki Admins where newfags, so Dark_Annihilator made the Source Teams. The discord was also established by now.

After Dark_Annihilator became the owner, not a whole lot would happen, as most vandalism was cleaned and 2b2t itself was slowly decaying. There where some catches, like when user Queen_Avios wrote about gigantic groups that never existed (Eyes of the Zodiac) and had a hissy fit when banned. However, in April of 2018, a youtuber by the name of AntVenom made a video on 2b2t. This brought in a large number of players, so the wikia was going active again with vandalism and so on. Many newfags began adding their fagtions and names all over the wikia, and it quickly turned into a mess. But there where also a few players that began adding more info onto the wikia, like AutisticBoi27 (ElliotRodger523). For most of the Wikia's history, the most prominent source of information for the Wikia was from Fit. But around mid 2018, a large skepticism towards him grew. This was mostly from how Fit dramatized numerous events, or just got them straight up wrong (See popbob). From this point on, a few would go on to read the old Facepunch threads to gather information from the olden days, or they would straight up ask the Oldfags. Later, some would take the skepticism harder as Fit got more critical of the Wikia. "It's ran by a bunch of Rushers" he said.

Around this time, the wiki was cleaned of a lot of bias from many oldfags directed at other oldfags, most notably Drewbookman and Sato86. An announcement is posted on the official discord on the 27th of June by RohenTah1r which simply reads "@everyone feel free to remove notices and things against sato."

On July 25th 2018, Wikia, commonly known as FANDOM, reviewed the 2b2t Anarchy Wiki, and have concluded that it had violated their ToS, which resulted in the wiki being deleted. The content of the wiki was sent to the higher-ups in the form of a.TXT file. A large place where many went after the Wikia was deleted was 2b2t redux, but it got taken down as well. The original group that owned the old Wikia moved to the wiki hosting service Miraheze, where it still is to this day. However, there was a competition. After the Wikia was deleted, jared2013 also made his own Wikia, which was about as successful. It eventually fell as more traffic was going to the original. On October 27th, IP editing was disabled, to make vandals have a harder time. After Etika joined the server, there was a massive boost of activity, with many of his fans even staying here after he went away. Soon after, the original wiki was restored. As of today, there are multiple 2b2t wikis hosted on Miraheze.

In September of 2019, the 2b2t wiki experienced a bunch of vandalism from a group that wanted to have its own page on the wiki (Everflame). The owner of it, who shall not be named, would constantly change his IP or just use his school IP when he got banned. When the site-wide admins caught what was going on, they banned his school IP, and some asshole admins saved the IP before Jonathan222 removed it off the list. The owner of Everflame would then disappear for a while. On September 9th, a user named Melofors (Who had been active on the 2b2t wiki) creates a draft for an article about 2b2t for Wikipedia. It is not until November 23 when the article becomes official. In November, four of the inactive Admins are demoted for inactivity. Right before 2020, ElliotRodger523 quits, and the beginning of 2020 is a bit slow. He comes back on February 20th and cleans up pages with doxxes, false information, and bans 3 imperial members. The owner, Dark_Annihilator, is seen to be active last sometime around October 26th, 2019. While it is unknown why he is currently gone, it is known that he had previously taken a 10-month break from the wiki sometime in 2018. With the owner inactive, the wiki takes down a dark path, with many of the staff absent.

On April 9th, a schism was formed within the community when jared2013 (known on the wiki as CremationEnthusiast) enters the wiki discord and begins to critique aspects seen in the wiki (which he couldn't repair since he was previously banned due to vandalism). It was brought to light that the inactivity of Dark_Annihilator and the perceived bias and lack of professionalism stemming from bureaucrats Rohen_Tahir and Jonathan222 were severely damaging the wiki in most eyes. Several staff members begin to form a union directly combatting the administrators. In retaliation to the attempt to demote him, Jonathan promotes Quarnds to administrator position who would, in the long-term, go against Jon. After a discussion with Miraheze Steward NDKilla, jared2013 and Galvatron realize through editing permissions they could grant themselves the power to strip Rohen Tahir, Jonathan222, and Dark_Annihilator of their Bureaucrat status, subsequently assigning themselves the status of Supercrat. The stewards arrive after receiving multiple messages on the official Miraheze Discord server, and they strip Galvatron's and Jared's roles. ElliotRodger523 becomes the sole bureaucrat for a couple of minutes. Jonathan, Dark, and Rohen are given back bureaucrat roles. Two pages are made on April 10th to decide what should be done by stewards, and Rohen_Tahir also demotes himself from admin and quits. Here is a link to them: Proposed Changes to 2b2t Wiki Staff, and Ban Status of Users LordGalvatron and CremationEnthusiast. The wiki is very active around this period of drama, and the week gets about 10.5k unique page views. This beats the record, which was 7.2k unique views in 2017.

On April 23rd, after much debate and anticipation, Dark_Annihilator and Jonathan222 are stripped of their bureaucrat and administrator status, while Galvatron's bureaucrat status is restored and Rohen_Tahir resigns due to the fact "they were useless to [him] and trying to keep them would requi[re] lots of effort..." ElliotRodger523 later resigns in late June due to most of his friends either being forcefully demoted, banned, or quitting. Due to Dark_Annihilator's continued ownership of the Discord, and the inability for any active Wiki staff to remove Jonathan and Rohen's bureaucrat role in Discord, the team made efforts to move the community over to the new server. However, Jonathan222, unhappy with his demotion, attempted to block this by removing Discord invite links. The old wiki server became increasingly chaotic due to irreverent shitposting and abuse of the Bureaucrat role permissions by Rohen Tahir. This lasted until a breaking point on June 5th, 2020, when ElliotRodger523 opened up the announcements and rules channels to all users, and Rohen later giving all members administrator permissions, causing total chaos. In reaction, _Henry_ and Quarnds decided there was no chance of salvaging it, and wiped it clean the same day.

According to Rohen_Tahir, Jonathan222 began to ban people of the old discord, with no apparent pattern or reason behind it. This was after Elliot Rodger, Rohen, and Jon turned it into a dumping grounds for shitposting and members pinging @everyone hundreds of times. The new discord began to develop and had makeshift channels and roles while the migration was underway. Henry is voted to become the "President" of the wiki following Dark_Annihilator's demotion as the wiki founder. There was also a mass-purge of irrelevant pages by Joey_Coconut, which left many pages with red links until someone removed them or forced a redirect. Approximately 1/3 of the Wiki's content pages (at most) were purged. 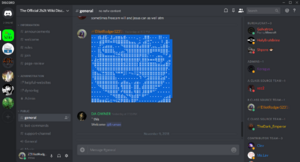