Block Game Mecca (BGM) was founded on January 1, 2017, and griefed on June 1, 2018. It is considered one of the largest bases on 2b2t, although, after its grief, many of the builds were determined to be schematics. 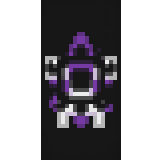 The banner of Block Game Mecca 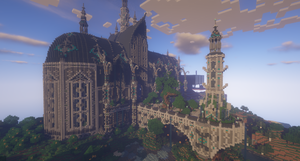 A render of the cathedral.

Block Game Mecca was founded on January 1, 2017, by GanjMeisterBlock and AutismBot. Its creation followed in the wake of a short-lived project with C4RTM4N. Most of the original base members were selected from C4RTM4N's Creative Mode Project, with a few additions of friends. The base started slowly, due to its distance and the lack of a travel exploit at the time, many members took months to arrive. A goldfarm was constructed early, but most of the initial efforts went into creating the guardian farm area. Once that was complete, the sorting system and the UFO (circular spike building near goldfarm) were built. Not long after those were constructed, the donkey dupes became public. The members of BGM immediately began work on a large number of massive builds, several of which were never completed. The cathedral is probably the most impressive of them. Nearly everyone at the base put some work into it, and it was completed less than a week before the base was griefed. 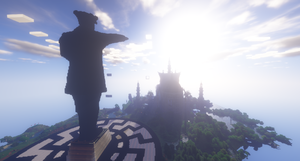 A render of the Hitler Statue, a symbol of the base

Block Game Mecca had a "trickle" invitation system. The members found that long periods of peacetime exhausted players, and accordingly had several-month long gaps between inviting players. Invitations were generally handed out every 3-6 months, with only one or two people being recruited at a time.

A render of the entire base.

The downfall of BGM came with the last series of recruits. The base was beginning to stagnate, and out of a large list, doctrzombie, Todarac, and Beardler were invited, as all had fantastic reputations. Unbeknownst to the members of Block Game Mecca, Beardler had conspired with a player named Odorous to steal all the items in Drathader's museum. A short time after his arrival, on June first, 2018, the museum was stolen and withered, and the center of the base was slightly damaged. Base members along with jared2013 concluded to blow up the rest of the base rather than allow others the satisfaction of doing so. These events led to the "BoeMeccan Witch Trials," during which it was proven that Beardler held guilt in the destruction of Boedecken as well as Block Game Mecca. 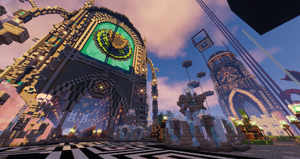 A render from the front of the cathedral, with TheColdOneJC's tower visible. 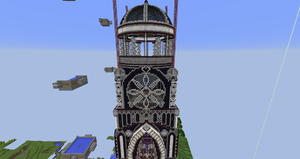 An image taken from the front of TheColdOneJC's tower.

After the fall of the base, Ain discovered that a sizeable portion of the builds present at the base were schematics taken from other sources than the base members themselves (largely, the popular Minecraft community content website Planet Minecraft). Ain posted his findings on the 2b2t subreddit which can be found here.

The following are the videos from doctrzombie's base tour: