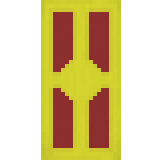 The banner of Castle Hatehart

Castle Hatehart, also known as Castle Hateheart, originally named Bitchette and named the West Road Inn in its early construction was an abandoned castle used as an inn for travelers created in conjunction with the Old Spawn Road by LegitYarik in Late 2013/Mid 2014. The castle would later be used by Team Veteran and griefed by the vets due to incoming traffic from the road. Multiple restoration projects have been made by traveling individuals. Due to its proximity to spawn, however, the castle would always get griefed again and again. 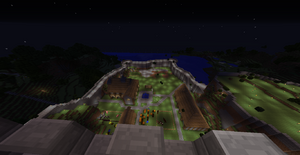 Castle Hatehart in its first inception under late stages of construction

LegitYarik, the creator of the Old Spawn Road, decided to build a large castle for travelers in conjunction with the old spawn road around about 2013/2014. Since it was built during the construction of the road, it was specially built to accommodate for the path. This castle would serve as an early start to travelers, having mines, food, and all the basic necessities and early player would need at the time.[1] In 2016, throughout the 4th Incursion, the castle would serve as a good meeting point for veterans.[2]

The Easternmost point of Castle Hatehart (excluding an old hut on the Old Spawn Road) is one of the large towers that overlooks Castle Hatehart. Unlike the West Tower, it is completely made of stone bricks and other stone material, and its foundation goes around the mountain instead of on top or beside it. This is, like many other points in the castle, very barren in its original version. The reconstruction by Negative_Entropy added a little, but definitely not much.

The West Tower of Castle Hatehart overlooks the exit of the castle to the Old Spawn Road and is now partially developed into for way of 1533 Highway. It implements wood and interesting architecture, similar to but definitely a bit more appealing than the East Tower.

The Church is an outlier, lying outside of the wall which encloses Hatehart and is a small build. The church's watchtower directly oversees the majority of Castle Hatehart. It can alternatively be seen as a meetup point, although considering the original intention of the base was an inn for travelers, this is unlikely (unless used in the 4th Incursion, see History/The Rusher War for more details).

The large wall of Castle Hatehart envelops the large build (excluding the church). It has three layers: stone brick, cobblestone, and stone brick. Overhangs of the wall have barriers made of stone bricks and stairs. The East Tower incorporates much of the east wall, and four wooden pillars at different heights connect wall "towers." The main entrance/exit points via the wall into/out of Hatehart are:

There is an unofficial entry/exit in the North of the tower, however, it is too small to be counted. The 1533 Highway Entrance, which was made after the tower's demolition, can also be counted but isn't official.

The Watchtower is almost directly centered in Hatehart. It overlooks the castle, surrounding highways, and the outlying areas outside the castle.

The Northern part of Castle Hatehart includes some decorations, such as a small nether wart farm, two portals that can be alternatively used as very small gold mines, a small hut in the back, a brick house near the farm, a large house in front of the East Tower, a cafe, and leave/tree/flower decorations.

The Main Farm of Hatehart is almost contracted with the West Tower and includes a small waterfall and 6 large squares of wheat. There are also a lot of farms dotted around, the Next Main Farm being one underneath the West Tower, with about half as much wheat.

The castle was griefed in 2016 by Team Veteran due to the road being directly connected to spawn via the Old Spawn Road, thus giving away their meeting point to Rushers.[2] The castle was repaired by individuals multiple times, each being griefed harder and harder.

After the castle was griefed, it seemed abandoned and desolate. Traffic from the Old Spawn Road was diminishing, and the main visitors of the castle were newfags from the 1533 Highway, which was developed over a large section of the ground demolished and tunneled through the West Tower. Some of the mines and mob spawners are intact underground, although griefed very badly by withers. The Castle was griefed again by someone nicknamed "9" in August 2016 (check comments of 2nd reference).[3][4]

Negative_Entropy's comment on the experience of reconstructing the castle years later.[5]

Negative_Entropy, a traveler finding the castle, began to repair the very intact ruins December 27th, 2016, according to signs he left. Traveler IvoireThePaladin coincidentally found the castle as well and began to help the small restoration needed. All was going to plan and the castle was nearly finished when Mines, a YouTuber, made a video on the restoration attempts by Entropy and Paladin.[4] Although not confirmed, this can be thought to mark the castle's demise. Demolition to the castle occurred after with withers and TNT, and the castle seemed to be gone for good. The griefer was later revealed to be a player by the name of Tavux in January 2017, according to a now private YouTube video (check comments section of reference).[3] It was nearly unrecognizable at some points, with later individuals simply turning the ruined builds far from their original state (example: the area right near the South Wall, supposed to be a path, grass, and stone floor, is now a large rectangular block of air appearing to be a quarry for materials). According to IvoireThePaladin, Negative_Entropy did the main building in a very short amount of time while Paladin supplied materials.

Entropy later became a notable player in the 2b2t community. When questioned, he said "restoring things is somewhat calming" in reference to Hatehart. He also commented, "this was my first and last build restoration on 2b. patching it up was fun but only made it get blown deeper into the ground[...] i let ruins be ruins since".[5]

Players who assisted in this reconstruction are:

Castle Hatehart After It's Griefing between the first and second main reconstruction.

On April 15th, 2020, reconstruction began by Fredmodulars. Fredmodulars eventually found GKappaPride, a traveler on the Old Spawn Road who had recently lost many of his materials and old base. Originally, Fredmodulars would recreate structures block for block from the original build until he found schematica and GKappaPride found baritone, where the process was much faster. Two travelers stopped by flying towards spawn and one, Blueser, helped with demolition to a part of the castle beyond repair later on. On May 9th, the castle was near to completion when Venroy15 and Komila attacked GKappaPride and he fled after combat. The castle was later destroyed. Players who assisted with this reconstruction were:

After Venroy15 and Komila ended the Castle's life throughout the 2nd Main Reconstruction and GKappaPride had his account deactivated after buying it for pennies, Fredmodulars had joined the NFPR. After he rose the ranks quickly, he directed a very active operation to restore the castle. It was assumed to be the largest project inside the republic at the time, including base activity. It was led in early May by Fred and Jeffrey_214 (the VP at the time) oversaw the operation, although he had very little part in it. Even c0mmie_ assisted in conducting the project after a failed attempt to participate in the previous reconstruction. Midway through the project, it was ruined by griefers who left signs. One known griefer was Manafilms123. It is estimated around 10 people were either signed up to help and restore the castle and the only verified time a community assisted in restoring it.

Known people assisting in this reconstruction were: