The Cloud Club, also known as the Clout Club, was a Spawn Mason base around 3,000 blocks from spawn that lasted for about a week in mid-August of 2019. The base had many members invited to it, mainly friends of the Spawn Masons and Emperium members.

Once Elytras were re-enabled on the server, HermeticLock thought it would be a great opportunity to make a community skybase. First, Spawnmasons and Emperium members were invited, but soon people from all different parts of the community, such as The Backstreet Boys came and built alongside them. Many people - friends and enemies, came and contributed to the base in some way or another.

After about a week, FarmerJoe found Cloud Club and blew it up, despite fellow Backstreet Boys being there. The base was subsequently abandoned.

After it was blown up, the base gained attention due to a video by FitMC (video). Negative_Entropy also made a very good cinematic video (video) of the base. 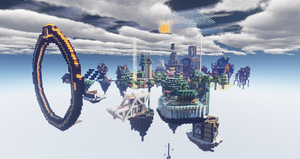 A view of the base
Are you sure you want to do that?
Huh?
Cancel
Continue