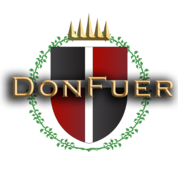 The coat of arms and seal of the DonFuerians

The DonFuerian Empire (or simply DonFuer) is an ideological group that was founded by D_loaded. DonFuer has been on several servers over several years. The group's goal is not to play games or get involved with drama, but rather just build and have a good time and influence the history on the server by action, not by meme .

The group or "idea", as they call it, has existed since August of 2013. It has spread its influence across a few servers and has had 17 different Capital Cities throughout a myriad of Minecraft servers, particularly anarchy or faction servers. It was brought to 2b2t by The Vortex Coalition. The Supreme Leader of VoCo, Coltsnid, had appointed HermeticLock as an executive member of the group. Herm was friends with D_loaded and suggested to Coltsnid that they recruit him into VoCo to build a large city for the group. Colt went with Herm to the 9th DonFuer on another server, and convinced D_loaded to join VoCo and build a city on 2b2t.

The 10th city was founded on December 11th, 2016. It stood for just over one month until its coordinates were leaked by Coltsnid on January 14th, 2017, due to the group's claim to be responsible for "The Fall of VoCo". 30 minutes later, Babbaj arrived at the city and attacked, turning the city into ruin. The 11th city was abandoned before completion because Hermeticlock was starting the Spawn Masons.

The 12th DonFuer was completed on July 10th, and griefed on 9/9, along with Don Meer, Don Hoggal, and Los Garr. Llane griefed DonFuer 12, to put the base on the museum working with Beardler. Later on, D_loaded ended up in some drama with the 6th incursion, causing them to have to leave 2b2t. As of March 2020, D_Loaded reconciled with most of the people from then and rejoined the Spawn Masons.

its members (the DonFuerians) are able to participate in city functions without worrying about other groups.

The DonFuer has several custom made hacked clients with unique exploits only DonFuerians have access to in which they can use to defend themselves or use to aid in construction. The latest update to these clients were by dragonworm, updating them to 1.15.2 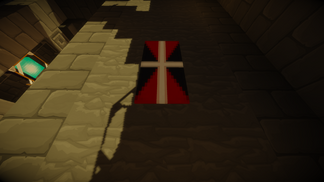 The name "DonFuer" was supposed to be a German translation of the phrase "Father's Gift." Although the translation was faulty, the name stuck. The name is used both for the group and its series of flagship bases.