Wintermelon was a base built by Toshie and Vaxent in October 2016. It was deemed the most magnificent city of 2b2t prior to its demise.[1]

After the Rusher War, Wintermelon was founded by Toshie and Vaxent. They had initially based at Acacia (The City of Melons) but after the explosion of the Rushers, it soon became apparent that the base was no longer safe, it being so close to spawn. 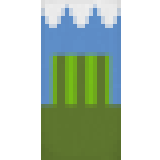 The banner of the Melon Group

Wintermelon started out as a modest tower build and an expansive underground storage area, but Toshie had even more on his mind. Soon after the fall of Acacia, theloneloner and Fuffer joined Toshie and Vaxent. They also encountered aaron_alvin on the nether highway, and ended up inviting him to the base as well. They would cautiously invite both new and old fags to Wintermelon.

MrChoCho_ raised Wintermelon's power even further when he personally discovered the 11/11 Dupe. No one knows if the dupe was known by anyone else before he discovered it, but alledgely they "had it for an entire month before it went public", according to FitMC.[1]

After the series of dupes that happened in the winter of 2016, a lot of the basemates got bored and became inactive. Toshie continued keeping Wintermelon alive but, just like most (if not all) bases on 2b2t, the coords were leaked by DeadlyDarkDragon due to sheer boredom. The players at Wintermelon were given a warning by jddinger, a fellow basemate, who was told by 4th Reich kike Sun_Wukon that the 4th Reich was coming. The place was eventually griefed, following a battle that took place with over 16 players.[2] This was the last organized event that the Reich has done before most members joined the Spawn Masons that month. Afterwards, the group went on to found another base together, Summermelon.