x0XP or "x0" is a well-known Oldfag that played from 2011 to 2015. He is most famous for griefing THEJudgeHolden's 1 Million Base and developing the Adolf/Xdolf hacked client. He remained a regular in the community, even after quitting, developing the xdolf hacked client and playing on Constantiam, before leaving in early 2019.

x0XP joined the server shortly after registering his Minecraft account[1]. While griefing on another server, he was told by the administrator to join 2b2t if he wanted to continue griefing. Joining, he played for a few months before quitting.

After coming back in late 2011, he was given access to popbob's backdoor plugin. Ostensibly designed to keep players off the Nether roof, it contained a backdoor that authorized users could use to spawn in items. At the time, he was basing at Ziggy Town, but moved to Plugin Town with the other people that had access to the backdoor. Even after Hausemaster removed the plugin, x0XP was still left with innumerable stacks of diamond blocks and TNT. 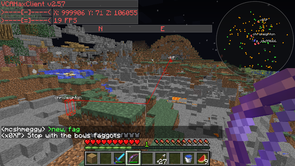 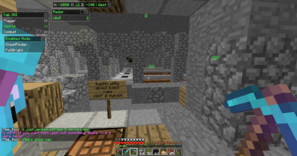 x0XP leaving a witty sign after raiding a base near spawn. 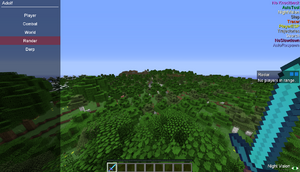 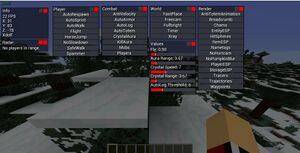 After offering to give some spawned-in diamond blocks to Omaliymix as a "bribe",[2] he was invited to the 1 Million Base. While some members were wary, he arrived shortly after the base was built.

In February 2012, x0XP griefed the 1 Million Base. Using spawned TNT, he destroyed the base's major structures. willyroof and Chrisleighton both logged in while the grief was taking place, but ran. Later, after the base had been destroyed, chrisleighton and jdw99666 returned and fought x0XP, but were again forced to run.

In mid-2012, x0XP and popbob had a falling out, and soon after, x0XP was blamed for a string of griefs including Ziggy Base, Jungle Saucer base and New NFE, although x0XP strongly disputes these allegations even to present day. As a result, x0XP was excluded from bases in the groups that he had been with previously.

x0XP subsequently went on a long-term griefing spree with Mylo66 in retaliation for being excluded from these group projects. and together they would become hated by many who were trying to play on 2b2t peacefully. The two of them consistently griefed many bases created by the remains of the Facepunch Republic and making it impossible for them to even setup bases for more than even a week. This eventually caused the remains of the Facepunch Republic to seek refuge at a new base at the time known as Valkyria. Many griefers started to leave signs saying those griefs too were the result of x0XP and Mylo66, leading to an even larger perceived wave of x0XP+Mylo66 griefs.

Adolf Client was a private client developed by x0XP based upon previously leaked Xenon client's module base. Adolf included features which were non-existent in clients during this period, such as the abilities to display other player's health and to view what enchantments other players around them were using. Adolf also featured hacks such as LogoutSpot, BowAimbot, a command that would instantly teleport a player to Spawn, and many NCP bypasses such as the ability to fly, teleport via boat and fire your bow with no delay at full velocity.

The Adolf client was later shared shared among some of x0XP's friends while he implemented a simple backdoor that allowed x0XP to type an uncommon string into the chat on 2b2t which would cause ofther Adolf users to communicate their coordinates to him unknowingly. This worked for a time, although _Aaron_ leaked the client on the Facepunch forums after x0XP crashed his client for a joke.

x0XP didn't directly return to 2b2t in 2016, although he did return to the external community via platforms such as Discord and Reddit, and also redeveloped and continued his client Adolf (renamed to Xdolf) with minecart26. Xdolf was created to be an open-source hack client designed and created not only for use on 2b2t but also to directly compete with private clients being sold at the time that advertised features such as AutoTotem, CrystalAura and EntitySpeed (horse and pig speed hacks). Xdolf received some controversy as x0XP was known to have backdoored his client Adolf in the past. As Xdolf was an open-source client though it also resulted in other clients copying the client and renaming it to be their own, this caused x0XP to make the Github repository private, and he began to obfuscate the client which eventually lead to Xdolf becoming abandoned in 2017.