iTristan is a notorious player on 2b2t. He is best known for his extensive knowledge of Java, alongside being involved in two of the three 2b2t backdoors. He was similarly a notorious griefer, hacker and member of several large bases. iTristan is credited with being one of the smartest players to play on 2b2t. They are the only player who ever spawned in and placed barrier blocks. His stash was found, but duped barrier blocks are unusable and can only be stored in a zombies hand or in a minecart chest due to the "disable block" plugin. 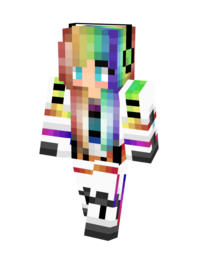 iTristan joined 2b2t on April 17th, 2012. In late 2012, he joined Kaamtown with his friend Amigo. He joined Kaamtown when xcc2 invited him, as Tristan had watched xcc2's youtube videos on 2b2t and recognized him. There, he would make 2 unfinished builds. Around 2013, he met Pyrobyte, who was also a talented coder and interested in running servers. They became friends and also began writing plugins for Hausemaster, as well as the 2015 April Fool's Temp Map.

His first time accessing a backdoor was when Hausemaster needed to patch the nether roof glitch. The plugin iTristan gave to Hause worked, however it also allowed iTristan and Pyrobyte to access the nether roof, meaning they could travel faster than everyone else. The second backdoor he created was to patch an infinite item exploit. Similarly, the plugin worked but also allowed the infinite item exploit to work when you give the item a certain name. As time went on he would develop other backdoors such as one that gave him a ghast egg and another to reach the world border, which iTristan reached in December 2013.

By mid-2014, there was an abundance of lag on 2b2t that made the server unplayable, so Tristan and Pyrobyte made 3b3t, which was a place where many 2b2t players could go when 2b2t got too laggy. He was a member of Valkyria, and decided to join Asgard II, so would Pyro, but they would run into issues as oremonger would go on to leak their coords. The members of this base would grief the base themselves and they would head out to spawn to start the Third Incursion. Pyro and Tristan used infinite XP bottles that they got using their previous backdoor to level everyone up so they could make loads of god gear. They used infinite obsidian to help build the Wrath Outpost. Pyro and Tristan would also abuse their Ghast eggs, sharing some of it with Jacktherippa during the Third Incursion. When the incursion was finally over they would go on to join Imps and King's Landing. iTristan had built a small building in the base and had shown it to a group chat, however the picture had the Base coords in it so he swiftly deleted it. Jared2013 however saw this and was quick to screen cap it, he did not have any interest in destroying the base yet as he did not know that was Imps and it was extremely far away. At King's Landing, Tristan was trolling Oremonger and accidentally leaked the coords in the process. After this event, many players would not trust him and therefore didn't invite him to their groups. Jared2013 and iTristan would also have a falling out, which prompted Jared to bring his supporters to Imps Base. When they showed up and found nothing, they almost turned to leave, when a tower appeared in Jared's render distance. iTristan and other base mates offered him a tour and a invitation to the base like they had to Popbob however, Jared was not interested. The destruction of this base would cause a chain reaction which eventually lead to the creation of Nerds Inc when on December 30th, iTristan leaked jared's stash and his diary. In return, jared "doxxed" Tristan by leaking his tzone account and world downloads, including one of a stash with backdoored items. This world download would be later used in 2016 as incriminating evidence towards the 4th Backdoor.

A short time before the Imps Base drama, Tristan and C1yd3i coded a new 2b2t website for Georgebush420 (the new 2b2t moderator after the original Hausemaster left), but the website was backdoored and was run on the same computer that ran the server. This meant that Tristan could create 32k's, stacked items, player/mob heads, enchanted glass, enchanted books, bedrock and void blocks.

On March 25th, 2016, jared2013 and Taylo112 attempted to grief The Lands. Tristan didn't tell the members of The Lands that the two were coming and even let Taylo use a 32k from his stash with backdoored items. After the grief of The Lands, Nerds Inc and C4RTM4N's group travelled to Oremonger's clock base and griefed it. The next day, CainesLaw and Jacktherippa sensing something out of the ordinary was up, looked into the leaked world downloads and found illegal items in a world download of a stash. So, they travelled there and raided it. After this sequence of events, Nerds Inc based at taylo's 2012 mushroom base and a bedrock sphere created by georgebush420, called The Archive (build), where they housed every item in the game.

In April 2016, Nerds Inc commenced the Week of Destruction, when they blew up a base every week, including Space Valkyria 2, SilverKrownKing's shekel stash, and many other stashes. They also re-griefed the Kool Kids Klub, Space Valkyria, and King's Landing. A day before the grief of KGB, Tristan and c1yd3i bought alts and griefed it the following morning. For the next few days, no one knew who griefed KGB (although everyone suspected Nerds Inc). c1yd3i had recorded the whole grief, which was somehow found by Kinorana in his public OneDrive folder. After this event, the player count dropped for a few weeks as everyone temporarily left the server as they had felt that it was not safe to play on the server anymore.

Today iTristan and many of the former Nerds Inc members would go on to join Constantiam but one time when Tristan logged on to sign a book in October of 2018, and he still occasionally has been seen playing. AlphaComputer and Kinorana would go on to dupe Tristan's illegals and sell them. Today all the stacked items either originated from Tristan's stash or the drop dupe. All 32ks, player heads, stacked glass and other illegals mentioned have also originated from Tristan's stash.

Around 2019, Policemike55 posted a detailed history of himself onto the 2b2t Reddit. When people grew suspicious of Mike's authenticity, iTristan was contacted due to having contact with the original Mike, and later confirmed that Mike's account was bought.

iTristan was seen on 2b2t and with some Nerds Inc associates on Constantiam, as well as being spotted in 2b2t test server during the second 1.16 test. According to Tristan, the accounts haven't been stolen or sold and are the real members of Nerds Inc. He is also seen stalking and trolling Oremonger on Constantiam, typically on his alt accounts.