These items will be listed with a rarity based on how hard they are able to find or attain: 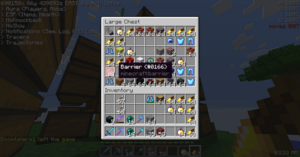 Barrier Blocks in iTristan's inventory due to the third Backdoor.

Removed by Hausemaster (possible to obtain with commands in Minecraft, but disabled on 2b2t)[edit | edit source]

These items you can store in Shulkers and Chests as long as you don't open them. If they are in a Shulker, you can ".peek" into them with clients like Impact. You can also unstack Illegal Stacked Items with droppers.

Removed by Mojang (no longer obtainable in Minecraft)[edit | edit source]